The BBC announced yesterday who Matt Smith would pass the sonic screwdriver to and it is with much delight that I introduce to you, Peter Capaldi.

Capaldi has amazing acting experience, including an Academy Award for his work on the short film Franz Kafka’s It’s a Wonderful Life.  Seriously, check out his IMDB wrap sheet. Two shows you might recognize, Doctor Who and Torchwood!  Capaldi starred in the episode of Who, The Fires of Pompeii, in which also starred one Karen Gillan.

And I need to address the reactions from the younger Whovian female fanbase.. Look, I can fangirl with the best of them; but for Who, the real fans know that we don’t fangirl over the actor. We fangirl over The Doctor. And Capaldi will be no exception. Please don’t judge a book by its cover. Let him get into the TARDIS and let him become the Timelord you will no doubt grow to love.

I’m ready for the new adventures.

Watch Peter Capaldi be introduced to the world…

The new star of Doctor Who will be revealed in a special live program on Sunday, the BBC has announced.

The half-hour show, presented by Zoe Ball, will feature an interview with the new lead, as well as 11th Doctor Matt Smith and executive producer Steven Moffat.

“The decision is made and the time has come to reveal who’s taking over the Tardis,” Moffat said. “For the last of the Time Lords, the clock is striking twelve.”

Doctor Who Live: The Next Doctor, is on BBC One at 7pm on 4 August, which means it will be announced at 2pm on BBC America here in the states.

Read the rest of the story here.

Matt Smith’s final episode will be this year’s Christmas special.

First, we’ll have the 50th Anniversary Special which will be simulcast across the world on November 23rd. In an effort to avoid spoilers and plot leaks, BBC Worldwide is orchestrating a worldwide simulcast in 200 countries, with an expected 100 million viewers.

Here is the full Doctor Who 50th Anniversary Special panel from SDCC 2013: 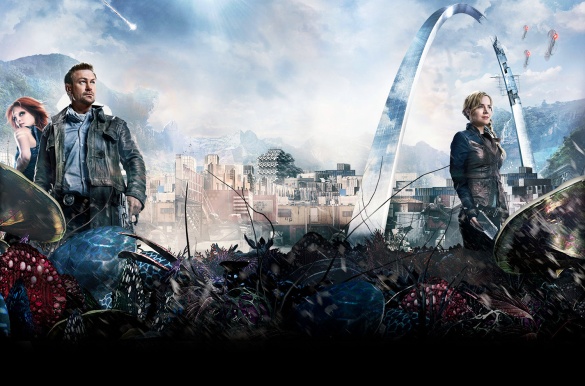 Those of you who read this blog know I’m no stranger to Syfy Channel and their many shenanigans. I have a very public love/hate relationship with the network. I love when they employ high level science fiction shows with brilliant, tried and tested writers, producers and directors and I hate when they cancel said shows. (I’m looking at you, Caprica, Eureka and SGU). I also hate wrestling.  (Not that there’s anything wrong with it!)

Based on this relationship, any show they start I approach carefully and that’s how I started with Defiance.  I had a love/hate relationship with this show… at first.  It has since won me over with all its kitsch, clichés and sci-fi rip-offs.

Yes, some episodes were at times barely watchable at first pass (The Serpent’s Egg) and I almost bailed on the show completely, but I had faith in the potential of this series. I fell in love with the characters which drove me back to watch it again On Demand.  I started with the episodes I loved (If I Ever Leave This World Alive) and then watched the whole series all over again. I should also mention that I haven’t played the MMO, but I certainly understand the innovation of bringing the two worlds together as a package. I’m also thankful that you don’t need to play it to enjoy the show or vice-versa. Keeping that in mind, here are five reasons you should be watching Defiance:

Look, if you gave up on this show after a few episodes, I don’t blame you. I almost did myself. But I HIGHLY recommend you go back and re-watch and stick it through. When all was said and done, the writers presented a lot of strong story arcs which they completed and at the same time opened up a lot of good questions that will keep you on the edge of your seat until Season 2 hist next summer. Step back, accept the clichés and kitsch, and just enjoy.

Defiance was recently at Comic-Con this month, here is the Comic-Con reel they presented and the full panel:

Defiance airs Monday nights on Syfy Channel and will return for Season 2 in June 2014.

The interwebs were set on fire yesterday when news broke that none other than sci-fi directing genius, J.J. Abrams (Lost, Fringe, Star Trek) was announced as being the next appointed director for ‘Star Wars: Episode VII‘.

When I first read this yesterday, naturally I was in a state of disbelief. I mean, the same man helming the two biggest sci-fi franchises in the history of sci-fi? I’m still a little flabbergasted and suspicious as no one has officially confirmed this information.  Now that the age old question of Star Wars vs. Star Trek is in the hands of one of the greatest directors ever, YOUR ARGUMENT IS INVALID.

The Wrap broke this news yesterday stating that,

an individual with knowledge of the production told TheWrap.

Deadline is also reporting that according to a source for them,

I’m honestly not sure whether to be excited or scared. Admittedly, I am a huge J.J. Abrams fan and I believe if anyone has the chops, its him. But, handling these two franchises causes concern.  Although, lens flares on light sabers HAVE to look cool.

Hopefully, we’ll get some absolute confirmation on this soon so fanboys and fangirls across the world can take a deep breath and relax. Despite all the flames, The Wrap did state,

Reached by TheWrap, Lynne Hale, spokeswoman for Lucasfilm, declined to comment immediately. Neither CAA, which represents Abrams, nor Bad Robot immediately responded to requests for comment.

So, no solid confirmation yet. In the meantime, ponder this –

So, yesterday we learned that Doctor Who will return on March 30, 2013 as part of BBC America’s Supernatural Saturday block. We’ll get 8 new episodes penned by the very best in show writing and in Who legacy. But what happens next? What will the 50th Anniversary hold?

Geeks of Doom has some interesting information regarding the latter half of 2013 and of course, the Anniversary special slated to air in Autumn of this year. At the 2013 London Toy Fair a banner was spotted outlining some of the highlights for the rest of 2013, including:

2013 truly is the year of WHO. One other observation, however –

What also captivates me about the banner though is that there is NO mention of a Christmas Special for 2013. This has to be erroneous – it just wouldn’t be Christmas without a Doctor Who episode! I mean, Santa I can do without…

Agreed! Christmas just ins’t so without The Doctor.  Hmmmm… they wouldn’t do that, would they?

Head over to Geeks of Doom to read the full details and watch the trailer for the Doctor Who Revisited Specials below:

I can’t let these slide, and I’m hoping someone will at some time confirm this, but the latest is that all 11 Doctors will be featured in the Anniversary special thanks to some ‘studio trickery’.  Digital Spy posted an article Tuesday that claimed,

An article from the Birmingham Mail claims that current Who star Matt Smith will be joined by his seven surviving predecessors. Tom Baker, Peter Davison, Colin Baker, Sylvester McCoy, Paul McGann, Christopher Eccleston and David Tennant are all said to be appearing in the November one-off.

In addition, the report claims that the Steven Moffat-penned episode will use “studio trickery” to include appearances from the first three Doctors – played by the late William Hartnell, Patrick Troughton and Jon Pertwee.

The BBC is yet to confirm any official plans for the Doctor Who special, which will mark 50 years since the sci-fi drama’s first transmission on November 23, 1963.

I have a feeling we’ll be getting more and more rumors and no facts until we get really close to the air date. Still, it’s fun to imagine all 11 Doctors solving a crisis. I think the term would be, NERDGASM.

We’ll be keeping a close eye on this one as more and more info is released.

What are your thoughts for the Anniversary?  Can you live without The Doctor on Christmas?

I'm That Geek
Blog at WordPress.com.